But after a few very messy attempts and a lot of stubbornness that I will call patience, I reverse engineered my very own recipe of the illusive Lucky Charms marshmallow– and I call it HALALY CHARMS!! And it is glorious!

What follows is a gangsta recipe that is not for the faint of heart. It is for the OG (Original Grandma).

But first let me ramble on, as most food bloggers do, about my love affair with the food item in question. Let me tell you a little tale. Name has been changed to protect the guilty.

Once upon a time, there was a little girl name Eresa-Tay who loved sweets and cereal. When she stumbles upon a cereal that also had candy it in, it blow her mind.

END_OF_DOCUMENT_TOKEN_TO_BE_REPLACED

Most recipes from my home land of New Orleans include pork (or alcohol). It is a sad reality that I have to face everyday. I thought about organizing a marathon to raise awareness of this travesty, but no one I know wants to run or even walk.

Alas, I have dried my tears and become a creative cook because I refuse to let a little pork get in the way of destroying the traditional dishes of my people.

One of my favorite home town dishes is jambalaya (JUM-bah-LIE-yah). It is a twist on Spanish paella with French and Caribbean spices. 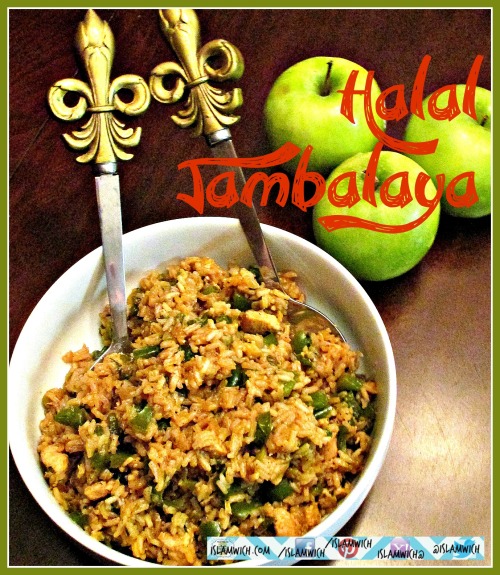 In jambalaya, andouille (ANN-do-ee) sausage usually features in the recipe. And if not that spicy, pork sausage, then some other form of ham is mixed in. But it shouldn’t be a big surprise to know that you can just leave the pork products out and !viola! you have a halal jambalaya recipe.

It really is that easy. And you really don’t miss it. You can add any other kind of meat that you want. I added chicken, but shrimp, crab, beef sausage, or all of the above, work just as well.

END_OF_DOCUMENT_TOKEN_TO_BE_REPLACED

I have been a fan girl of the website myhalalkitchen.com for some time. I might need a restraining order from the Pinterest page. So when I heard there was a book coming out, Oh My God, y’all, I was so excited.

If you are not familiar with the phenomenon that is Yvonne Maffei and her website, check it out. She did a podcast right here on islamwich not too long ago. Check that out too.

Yvonne’s website is a resource of all things halal (permissible), including tips, recipes, halal substitutes, a blog, and so much more. And with a following of 1.2 + million people on Facebook alone, it is a phenomenon not to be missed.

The book, My Halal Kitchen by the same genius mind who created the website by the same name, is to me and many other Muslim American foodies, the answer to a prayer in an American gastronomic scene that is wrapped in bacon and battered with beer (i.e. mostly haram).

END_OF_DOCUMENT_TOKEN_TO_BE_REPLACED

Written and Test-Kitchened by  Stephanie Siam

Being from the Southern United States, I grew up on certain staples that can be difficult to replace after converting to Islam: lots of processed junk food, questionable meat products and, of course, Lucky Charms. While my heart and gut are thankful for my (slightly) healthier diet now, it’s often hard to please my nostalgic taste buds when it comes to traditional family favorites.

Moving to the Middle East made it even trickier to reproduce these dishes due to lack of necessary ingredients. Sure, I can find halal items easily, but now I have limited access to brands I’ve grown up on.

Of course, the times when I get most foodly-sentimental are when I a) see a long-loved favorite in the grocery store that imports American items and b) around Thanksgiving. Sure, lots of expats (Americans living abroad) celebrate Thanksgiving over here in Oman.

END_OF_DOCUMENT_TOKEN_TO_BE_REPLACED

Since Ramadan is about a week away, it only seems fitting to talk about food. What follows are from articles I have written for Aquila Style -a magazine for Modern Muslim Living- and a previous islamich post.  SOOoooo Yes, I am totally about to quote myself …

The southern USA has a rich tradition of unique cuisine.

This culinary uniqueness reaches a fever pitch in the port of New Orleans, Louisiana. It is as if New Orleanians decided to represent their melting pot of different cultures in a literal cooking pot […] New Orleans is a fantastic destination for any hungry traveler or foodie looking for fanciful fare.

However, as is the case with most southern cuisine, the New Orleans food experience can be a gastronomic “landmine” for Muslims.

Most recipes either use parts of the pig or have some pork added for “flavour”. And when you do find a dish that looks pork-free, you will often find that there is alcohol added.

As a convert living in southern USA, who grew up on New Orleans food, I have had to tweak my mother’s recipes into home cooking the halal way. From gumbo minus the ham hock stock to bread pudding without the rum drizzle, New Orleans and American southern food doesn’t have to be passed up because of its haram components.

New Orleans is famous for its gumbo

[…]Unfortunately for the Muslim who takes a trip to New Orleans to try this stew, gumbo is almost always made with pork. Whether it is in the stock, a ham bone thrown into the roux for flavor, or pork sausage as one of the meats added to the stew, pork is almost always an ingredient in gumbo.

But there is no reason why Muslims should miss out of this robust multi-ethnic dish. Gumbo doesn’t need pork – shrimp, chicken, crab, or even fish can replace that part of any gumbo.

BBQ Shrimp (deceptively named because it has nothing to do with barbecue sauce or grilling) is usually cooked with beer. I did a little research and some creative cooking, and discovered that the recipe could be adjusted for the halal palate.

The All Important Crawfish Boil

Even though the crawfish boil usually entails some un-halal aspects, those can easily be switched out for their halal counterparts. So, if you have access to crawfish, even if it isn’t live or from the Gulf of Mexico, you need to think about having a boil. You will first thank Allah, then thank me.