Since Ramadan is about a week away, it only seems fitting to talk about food. What follows are from articles I have written for Aquila Style -a magazine for Modern Muslim Living- and a previous islamich post.  SOOoooo Yes, I am totally about to quote myself …

The southern USA has a rich tradition of unique cuisine.

This culinary uniqueness reaches a fever pitch in the port of New Orleans, Louisiana. It is as if New Orleanians decided to represent their melting pot of different cultures in a literal cooking pot […] New Orleans is a fantastic destination for any hungry traveler or foodie looking for fanciful fare.

However, as is the case with most southern cuisine, the New Orleans food experience can be a gastronomic “landmine” for Muslims.

Most recipes either use parts of the pig or have some pork added for “flavour”. And when you do find a dish that looks pork-free, you will often find that there is alcohol added.

As a convert living in southern USA, who grew up on New Orleans food, I have had to tweak my mother’s recipes into home cooking the halal way. From gumbo minus the ham hock stock to bread pudding without the rum drizzle, New Orleans and American southern food doesn’t have to be passed up because of its haram components.

New Orleans is famous for its gumbo 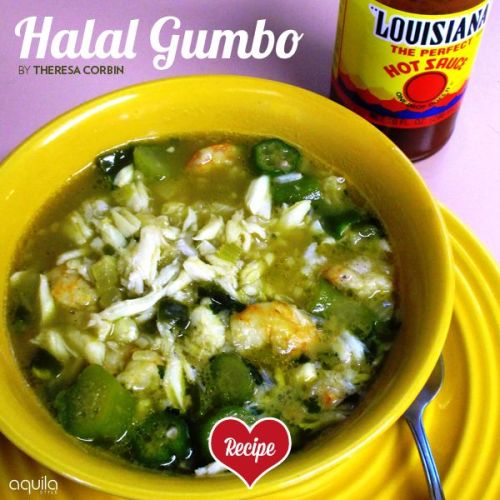 […]Unfortunately for the Muslim who takes a trip to New Orleans to try this stew, gumbo is almost always made with pork. Whether it is in the stock, a ham bone thrown into the roux for flavor, or pork sausage as one of the meats added to the stew, pork is almost always an ingredient in gumbo.

But there is no reason why Muslims should miss out of this robust multi-ethnic dish. Gumbo doesn’t need pork – shrimp, chicken, crab, or even fish can replace that part of any gumbo. 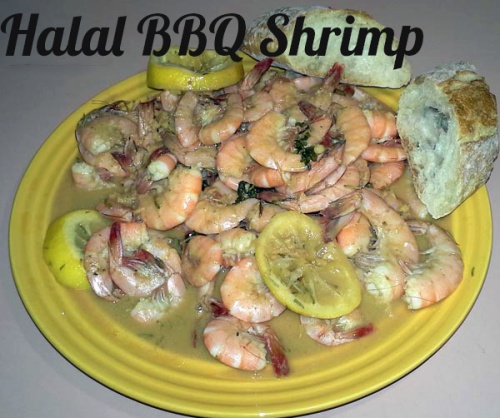 BBQ Shrimp (deceptively named because it has nothing to do with barbecue sauce or grilling) is usually cooked with beer. I did a little research and some creative cooking, and discovered that the recipe could be adjusted for the halal palate.

The All Important Crawfish Boil 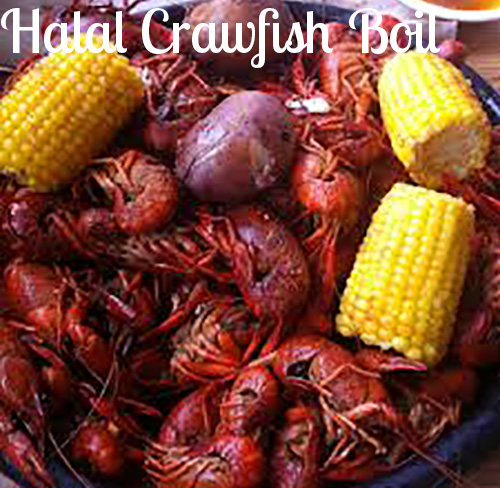 Even though the crawfish boil usually entails some un-halal aspects, those can easily be switched out for their halal counterparts. So, if you have access to crawfish, even if it isn’t live or from the Gulf of Mexico, you need to think about having a boil. You will first thank Allah, then thank me. 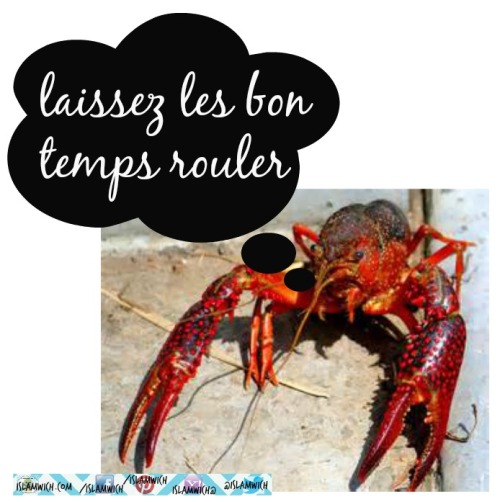 Hey, y’all! I have been having a pretty busy couple of weeks with my other writings and family stuff. But I did have time to squeeze in a crawfish boil.

In case you haven’t heard of such a thing, the crawfish boil can be described as a party in a sack. Crawfish come in a sacks the size of a third grader. They are then boiled in a large pot (like huge) with corn on the cob, potatoes, garlic, sausage, and seasoning. And everyone gathers around, rolls up their sleeve, peels the crawfish, stuffs their face, talks, and has a good time, washing it all down with beer.

When my father (who was born and raised in Missouri) married my mother (born and raised in New Orleans), he refused to partake in her crawfish boils. Until one day she brought home a sack of already boiled and spicy crawfish. She insisted that he stop being such a sissy (she was sassy like that), and try just one.

Well he did. And she regretted it. He proceeded to eat the entire sack, leaving none for her. She nearly divorced him for this travesty against humanity, but instead decided to train him to do all the hard work of a crawfish boiling, now that he was an enthusiast.

My father went on to become the best crawfish boiler, peeler, and consumer this side of the Mason Dixon line. (pardon my folksy-ness)

Spring time denotes the beginning of crawfish season in New Orleans and surrounding areas. With the weather not so hot yet, and the crawfish on sale, people get together to enjoy the bounty of the area and some friendly spice both in food and conversation.

Even though the crawfish boil usually entails some un-halal aspects (pork and alcohol), those can easily be switched out for their halal counterparts.

So, if you have access to crawfish, even if it isn’t from the Gulf of Mexico, you need to think about having a boil. It is an amazing delicacy in my neighborhood, and I don’t want anyone to have lived in this world and have never had a boiled crawfish. Some may be squeamish because it looks like a bug, but I guarantee it is worth the gross factor. You will first thank Allah, then thank me!

1 lb Beef sausage, sliced to bite-sized pieces (vegetarians who eat fish: you can just leave this out)
6 onions, cut in half
5 lemons, cut in half
5 heads of garlic, whole
1 c salt (yes, one cup. You don’t drink the liquid it’s boiled in and the salt needs to get past the shell of the crawfish)
10-12 small red potatoes
5 ears of corn, shucked and cut in half
60 oz of Zatarain’s crawfish, shrimp, and crab boil

-Bring a larger than life stock pot of water to boil (preferably outside if you can. The spices will make everyone in the house cough).

-Add crawfish and salt, cover, and cook or 5 minutes.

-Turn off heat and let set for 20 mins (the longer it stands the spicier it will be 😉 ).

-Drain water and pour out the deliciousness onto a table covered in several layers of newspaper.

-Bandage any cuts you have on your hands (these spices burn).

-Place a full roll of paper towels on the table (you and your guests will need the whole roll. It gets messy).

-Drench potatoes and corn in butter.

-Peel (how to peel crawfish:

-This is the most important step: Say Bismillah (In the name of God).

You don’t need pork or beer to have a great crawfish boil.
(you can also use this recipe for shrimp and/or crabs, as the zatarain’s boil suggests)
P.S. Make sure you wear clothes you are not overly fond of because stains happen, and throw your crawfish shells in the outside trash. It gets smelly quickly!

Like the post, share it, pin it, comment on it, and/or do whatever social media magic it is that you prefer. Find out more about us in the understandably named “About Us” page and browse other posts in “Table of Contents”.