This past weekend was Eid Al-Adha, a religious holiday for Muslims at the end of the pilgrimage to Mecca, where each family sacrifices an animal (the qurbani-which is to be consumed and given to family, neighbors and in charity) in memory of Abraham’s sacrifice and success. More about Eid Al-Adha here.

Our sacrifice for last year’s Eid Al-Adha was interesting to say the least. It all began with a Craigslist ad, like many interesting journeys do. In past years my husband and I had always purchased our qurbani (the sacrificial animal) with a group of other Muslims through the mosque who had arrangements with local farmers. Then a group of brothers would volunteer (which usually included my husband) to go to the local farm and take care of the slaughter, the butchering and the delivery of the meat.

However this year in particular (2013) we were in a new city with no such group qurbani purchase or band of brothers taking care of business. We were on our own. And since my husband has first-hand knowledge of farming (dad owns a farm), butchering and Islamic slaughtering practices, we thought-foolishly-why not DIY the Eid al-Adha experience.

Side note: before we get our knickers in a knot, most of us here eat meat. And in the West the process of getting meat to table is not one many like to think about, but it is a fact of life. In Islam kindness to animals is stressed. Cruelty to animals is a grave sin and even the feelings of animals are to be considered. In an Islamic slaughter, the animal to be slaughtered must be raised free from cruelty, have reached a mature age and be healthy. Muslims are enjoined to slaughter their livestock by cutting the animal’s carotid artery, jugular vein and wind pipe in a swift and merciful manner, with a sharp knife, saying in the name of God. The animal must not be shown the knife or made to watch another animal being slaughtered, as this will cause distress for the animal.

So, once we assured the reputable nature of the sheep seller and eventually the sale of the sheep, the problem of transport became apparent. How does one get a fully-grown male sheep, ram, whatever, complete with horns that can easily bust through Toyota’s toughest car windows, from farm to home? How does one not get pulled over by the police when transporting said horn welding animal? Very carefully and with lots of dua (supplication)-that’s how!

Mr. Sheep was upset that he didn’t get shot gun (tasteless pun unintended) and spent the 45 minute trip from rural Louisiana to our suburban home making a spectacle out of himself. And no threats of being grounded from TV helped the situation.

We arrived at our home free from incident by the grace of God. And we put out water for the fellow, hoping he would calm down after a cool drink. He did not.

Mr. Sheep ran around the backyard like me trying to find my terrified way out of a crowded and germ laden Chuck E Cheese. Poor guy was scared, so we left him alone for a few minutes to settle down. He did not. As soon as we stepped outside, Mr. Sheep chased my husband, horns first, through the yard around the tree and into the one sad dilapidated bush. I played my role of disapproving adult complete with hands on hip as I watched the procession before me. We must have looked like a rural version of the three stooges.

Eventually Mr. Sheep settled down and laid down right in front of my husband. This is where I started freaking out. I had never witnessed an animal being slaughtered and I was super sure that it was going to be scarring. I am not squeamish at the sight of blood (as I have in a past life worked in a dialysis clinic). I am, however, squeamish at the sight of suffering (Can’t stomach any of the Saw movies).

But as if by some miracle, Mr. Sheep accepted his fate and laid still and silent until he was gone. It was strangely a peaceful experience. We sat in sadness and silence once the deed was done. We missed Mr. Sheep’s antics, thanked God for providing us with food and Mr. Sheep for his sacrifice. Side note part deux: bringing the process of food acquisitioning closer to home has made me so much more thankful for the food I eat. 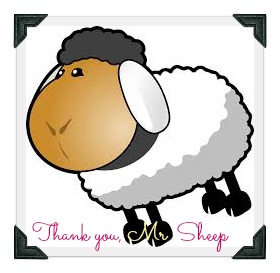 By this point it was dark, and as any successful hunter knows, you gotta get ‘er done and fast, butchering that is. I held the flash light on the meat as my husband taught me how to properly prepare an animal for consumption–if ever I were in a survival situation and there was no way to order pizza, the horror!

Now we could only hope and pray that our neighbors wouldn’t venture into their backyards and glimpse over the fence and see what to an outsider might look like a gruesome crime scene. They didn’t. Thank God. I can only imagine the police officer responding to a call of devil worship and meeting us as we try to explain Eid and Islam and halal slaughter practices.

In all honesty we were probably violating some kind of zoning issue. Which reminded me of an episode of Duck Dynasty where Jase does this very same thing but in his FRONT yard as a school bus full of children drives by. I am not a fan of being compared to rednecks, but I guess if it walks, talks, and lives in the same state as the Duck Dynasty …

Finally the meat was cut and stored, and we called it an eventful day.
But Mr. Sheep’s legacy wasn’t finished. Two days later a serious looking rash appeared on my husband’s arm. He contracted a common butcher’s disease known as Erysipeloid from Mr. Sheep’s wool (because tough guys don’t need gloves, right?. WRONG!). And for a week he had to get shots to rid Mr. Sheep’s legacy from our lives.

When all was said and done we had to admit that ambition (reads lack of preparation) and bravery (reads foolhardy-ness) doesn’t make for effective pioneers, even though we might delude ourselves in to thinking it does.

This year’s sacrifice? We went to MuslimAid.org instead of Craigslist.org. 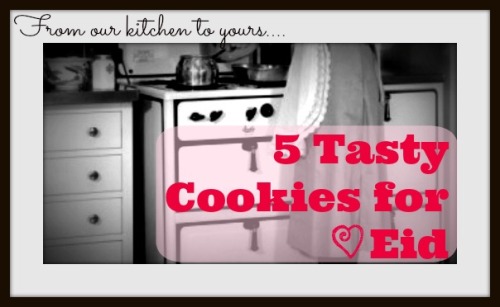 Written by Gracie Lawrence
There are many kinds of multicultural foods that span borders and cultures. Cookies are one of them. It seems natural, bite sized with various textures and add-ins, the variations are limitless. Some of us never deviate from family traditions, cookie recipes past down from generations and other of us are more like cookie connoisseurs, experimenting from one titillating recipe to the next.

Many converts from Christianity have memories of making cookies and dessert bars during holidays to share with neighbors, family and friends. Sometimes they are gifted in festive decorative tin containers and other times just in simple plates. It was a good way to bond with others and improve fellowship and community. It still is.

This Eid whether you are preparing for your traditional celebration with family or if this is your first one with friends, consider the cookie as the crunchy or chewy addition to your holiday plans.

Soft and sweet with a mild buttery taste. These cookies are always popular because they are fun to cut into various shapes and decorate with frosting, candy coated sprinkles or small candies. Combine both the artist and chef within and spread the holiday cheer with this fun cookie classic. Check out this blogger’s version below. 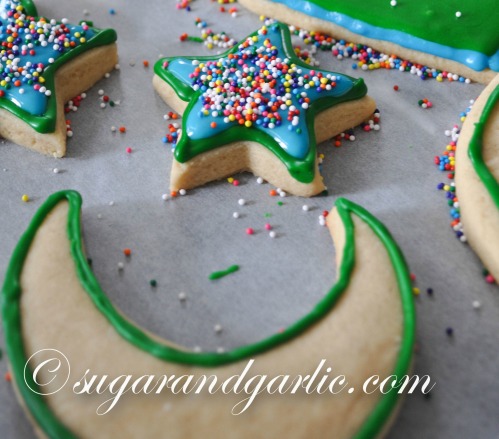 Whether you call them Mexican Wedding Cookies, Snowballs or Russian Tea Cakes we all know what you mean. Tender, rolled in white powdered sugar and made rich by the addition of pecans or other nut of your choice, these cookies are a hit with young and old alike. Other cultures also have their own version of this cookie and with something this tasty, it shouldn’t be a surprise. May we also recommend the the Middle East version of this cookie, Ghraybeh which incorporates the aroma of rose water and crunch of pistachios. Click the picture below for details. 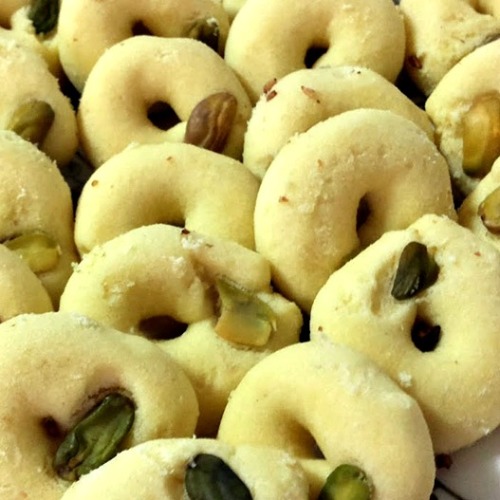 Variations of jams and the shimmering effect it has against the buttery crumb foundation is both a visual and tasty delight. Have fun deciding which kind of fruit to incorporate and don’t forget to pair it with the tea of your choice. The Swedish version called Rosenmunnar is both delicate and sweet. For the recipe, click below.

Chocolate is definitely a flavor enjoyed more in some cultures than others; however, for those raised with this aromatic, slightly bitter spice made from cacao seeds it is both comfort and addiction wrapped with a neat and sometimes sticky bow. Check out this interesting addition to your recipe collection below- Chocolate Afghan Cookies from New Zealand. 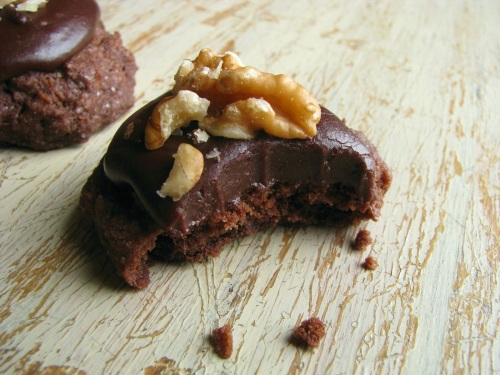 There are so many varieties of this cookie where this exotic fruit of the tropics is showcased. Some prefer these macaroons made with sweetened condensed milk, others prefer the light egg white version and others have no preference as long as it is dipped in chocolate. We invite you to try this North African variety known for its tender light crunch below. 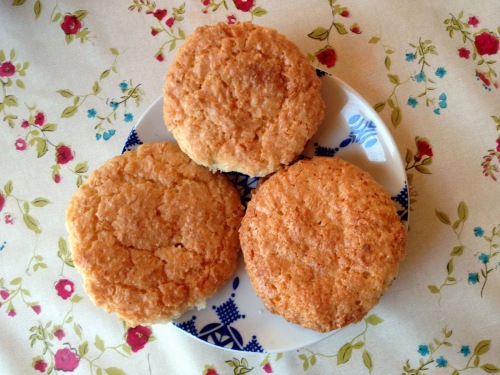 Cookies, whatever the variety, can be enjoyed from the very beginning, starting with your creativity in the kitchen, prepared thoughtfully alone or with family, and finally enjoyed with thanks and smiles as they are received with open hands and warm greetings during this Eid holiday. 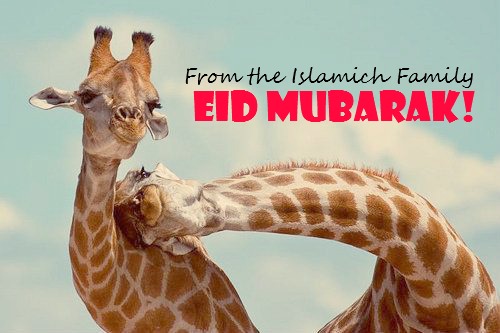