Hey, fart faces (I use this term in the most loving way imaginable), I have been working on a very scientific study about marriage dynamics in an Islamic relationship (that mostly involves me thinking of stuff that goes on in my marriage and my cohorts’ marriages). And I have come up with a list of some aggravating and awesome things that come about when you marry a (religious) Muslim man.

Ever since the first fart of the marriage-you can’t recall who broke the seal, but it happened, and all hell broke loose-you have a very distinct fear. It is irrational, but still haunts the Muslim wife Fajr to Isha (prayer times). It is the fear that his farting on you while on the couch or in the kitchen, or anywhere really, will extend to prayer times, since you stand directly behind him as he bends over and kneels, aiming his biological warfare directly at you.

It is irrational because prayer is probably the only time any Muslim man will do his best to keep it in the chamber. But still it is possible. And for that, many smart Muslim wives fear the fart and move their prayer rugs behind and to the side- out of mushroom cloud range. 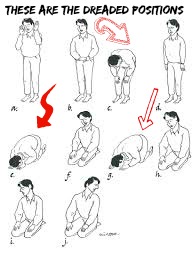 2. Thinking Going to the Masjid is a “date”

You know the convo. You say: Honey, we haven’t been out in a while. What do you say we have a date night? Then he responds: We went out just last week. Remember? We went to the masjid for that awesome lecture.  I don’t know about you, but I do not consider sitting in separate parts of a building, listening to a religious lecture, a date. But he does. How Romantic!

It is pretty gross to wake up and pour a delectable bowl of Fruit Loops only to find your man has been there. He has left one gross strand of face hair in your cereal bowl. The best part of waking up is NOT a beard hair in your cup (sung to the tune of the Folgers Coffee jingle).

Wudu or ablution is a big part of the Muslim man’s (and woman’s) life especially if he farts like I am pretty sure he does. He must be in a state of ritual purity to perform his 5 daily prayers (if one farts or goes potty, one has broken the state of purity and must make wudu). The problem is, come wudu time, he acts like he has been challenged by an ice bucket. And the bathroom counter, floor, and mirror bear the brunt of the water torture.

This is similar to beer goggles that leads a man to believe a woman is more beautiful than she is when the eye of the beholder has had “one too many”. In the case of the Muslim man, the phenomenon happens when a man follows the dictates of the Quran about not ogling women. Your Muslim man does not check out women or compare them to you.

This can result in him never noticing when you gain weight, break out, or generally look like a hot mess. He thinks that

you are the most beautiful women at the end of the day when all he has looked at are (usually old and fat) dudes. The problem with this is that you really have no idea how you look and your sense of self worth becomes inflated. Not to mention how gross and mushy it is.

Your Muslim man does not check out women or compare them to you.

He thinks that you are the most beautiful women at the end of the day when all he has looked at are dudes. The inevitable result is that you really have no idea how you look and your sense of self worth becomes inflated!

If women are the fairer sex, then men are the smellier sex. Don’t deny it. It’s science. But the great thing about a Muslim man is that he must wash his hands, arms, ears, feet, face and freshen his hair in order to pray. That wudu that left the bathroom looking like New Orleans after Katrina, has also left the Muslim man fresh and less smelly than the average bear.  The Muslim man is also encouraged- as a religious tradition -to wear cologne, leaving your Muslim man smelling so fresh and so clean.

3. He Puts Up with Your Hair in Everything

When you wear hijab, something interesting happens. All of your shedding has to happen at home (the hijab keeps it contained and builds up the shedding potential). Once the hijab is removed and the bun is unfurled, the games begin. Your hair, that would have fallen out where ever you go, ends up all over your home: in shoes, on pillows, clinging to clothing fresh out of the dryer, in the cat’s mouth …

But he doesn’t complain about it like you do about his beard hairs in your cereal bowl. He understands.

4. Having a Ride or Die Homie

Having a Muslim husband means that you have someone who you know has got your back, someone who will conspire evil midnight doughnut runs with you during Ramadan (or any time really), someone who will warn you of hidden pork at your favorite restaurant, someone who will call up the brothers to come down and take care of anyone who disrespects you, even if they do roll up on their tricycles.

5. Having a prayer buddy

It is nice to hang with someone who knows you schedule your life around prayer and not prayer around your life. This is especially useful in the winter months when days are short and prayers come in almost every other hour and you want to plan a matinee movie around prayer times. Or when you are travelling and one of you takes look out while the other pops out a few rakat.

Much respect to all the Muslim husbands out there who strive to be the best to their wives.

Follow us (upper right of the page), email us (islamwich@yahoo.com), like our face with your face on Facebook, like the post, share it, pin it, and/or do whatever social media magic it is that you prefer. Find out more about us in the understandably named “About Us” page and browse other posts in the “Table of Contents”.