Marriage is a commitment that requires unending devotion, conscientious effort, and a lot of patient practice. Selecting a suitable husband is quite possibly the most important decision a woman will make. So much rests on who she chooses to be her life partner:

Factor in religion, culture, and nationality, and a woman can just about go insane trying to satisfy her need to fulfill what many consider to be an obligatory rite of passage in Islam.

It’s no secret that many Western, female converts look eastward when searching for a husband. Perhaps their attraction to the dark, brooding males of the Orient is what initially drew them towards the study

of Islam to begin with – no, I’m not saying women convert to Islam for their men, reread the sentence.

However, no matter where these men come from initially, almost all of them share similar traits as Husbands to Western Convert Wives. And these traits can sometimes – read: always – be challenging negotiations when trying to merge two cultures into one marriage.

I mean, marriage is hard enough as it is.

END_OF_DOCUMENT_TOKEN_TO_BE_REPLACED

Howdy, folks. This week on islamwich, we have a special guest writer- Brother Abu Taurab. Abu Taurab is a Southerner who converted to Islam at the ripe old age of 16. He now spends his days working in the renewable energy field and his nights making gourmet meals for his wife and hanging with his two gorgeous children- ages 3 and 18. Abu Taurab is here to share some of his wisdom about getting married.

Growing up as a teenager in a small, tight-knit Muslim community in the South (of the US) there were four of us young mosque rats from the area, two converts (me included) and two born into Muslim families. The small community had its pros and cons. On the one hand, all of us young men were close and encouraged each other to do good. We really stuck together. On the other hand, when it came time to get married, opportunities were slim.

All of us ended up searching far and wide for partners. The journey to marriage varied in difficulty for each of us as did the continued journey. Here is some unsolicited advice on getting married that I gleaned from our groups’ experiences:

There is a very good reason we are supposed to stay away from flings with members of the opposite sex. Dating sucks. It involve intense emotions, potential for offspring, and monetary loss; things that should never mix without a contract protecting all involved. I have seen religious friends become obsessed with a member of the opposite sex. They created secret email accounts and shared the login and password, saving messages to each other in the drafts folder. It’s the kind of OP-SEC you expect to see in spy drama.

Don’t fool yourselves, getting emotionally involved with someone means you are walking a thin line. I have not met many people who actually ended up marrying that same person with whom they shared secret missives in the night. Keep in mind, that other person will probably end up marrying someone else. Protect your honor and her honor and just don’t.

Be patient. I have seen many parents stand in the way of their children getting married, demanding that they finish school

first. If this is true for you, this is not because your parents are not religious and that they don’t care about whether or not you commit zina (unlawful sexual relations), as is often assumed. Give them the benefit of the doubt. They are older and wiser. They want to make sure you are able to provide for your family. Of course, the provision is from Allah but the effort is from us. That effort means preparing yourself for a career or profession.

How often do you think your wife will want to get busy if you are homeless and starving? Trust me from personal experience, marriage is hard enough without worrying about where you will get your next meal or how you will pay rent.

Now there are extreme situations, emphasis on extreme, where a parent will not let their child get married no matter what, in which case it is a different story. If you are in this situation, then seek out the counsel of your imam or another elder in your community whom you and others trust.

Do things the right way. Make sure the father or wali (family representative) of your intended partner is on board. Back room dealings leave important people in the dark and that usually gets messy. When marriage is on the table, you are not just marrying a person,you are becoming a part of their family. If you don’t show respect to her family as well as yours, how do you think future relations will be? It is a recipe for strained Eid gatherings and Aqiqah (celebration for newborns) weirdness, among other things.

Remember that your future wife’s wali is not trying to control her life, in all likelihood he wants what is best for her (and so should you) and is looking out for her interests. You may be able to charm the girl, but the wali will be able to keep some sense about him.

4. Looking for a Looker

Marry for religion and not looks. Many a brother is looking for a highly educated, super model and gourmet chef who has memorized Quran and wears full niqab (face veil). But how often does the same brother measure up to those impossible standards? Not often if ever. Yes, a man should be attracted to his wife and vice versa. But for all of us, the beauty of youth will fade. And a woman with beautiful iman (faith) will always be beautiful.

The honeymoon phase eventually ends and you want to be with someone who will fear Allah (taqwa) and be good to you even when they are not happy with you. Trust me, there have been times when my wife would have shanked me if it wasn’t for taqwa. I don’t know about you, but I personally don’t want to be in a marriage that has prison rules.

Most importantly, once you do get married, forget all the crap that other young, unmarried brothers told you about marriage. She is NOT your slave and baby maker, but rather a partner and a potential best friend. Respect her, be good to her, and be gentle. Overlook her faults and mistakes and especially her bad hair days. She is trying just like you. Remember, in the end you both have the same ultimate goal … Making it to Jennah (paradise).

Follow us (upper right of the page), email us (islamwich@yahoo.com), like our face with your face on Facebook, like the post, share it, pin it, and/or do whatever social media magic it is that you prefer. Find out more about us in the understandably named “About Us” page and browse other posts in the “Table of Contents”.

In one month, I will have been married for exactly 12 years.

Allow me to introduce us:

My husband and I are both American Muslim converts. We are the same age. We come from the same area of the country. We both lack interest in football. We have the same sense of humor. And we didn’t know the other existed until we had an arranged marriage. The story of how that went down is here in case you are interested. And then we lived happily ever after … LOL

When we tell people our marriage would not have happened and would not work without Islam, the automatic response is “that is sad”. But it really isn’t. If you think about it, why else do people get together? They don’t want to go it alone. And they find someone who has similar beliefs and ambitions and try to make the load of two lives easier. Islam is our common belief and ambition.

And no matter what reason people come together, I think a lot of people treat marriage like it in itself is a religion (I blame fairy tales … lots of fairy tale talk. Probably because I saw Frozen three times and loved the non-traditional message).

Once people find a partner, they tend to approach marriage thinking the other party should offer them extravagant admiration and endless devotion and be perfect and constantly selfless and good smelling and save them from bad situations and on and on, i.e. they expect to be alternatively worshiped and saved. This kind of marriage has the seeds of failure and bitterness sown into its premise.

To me, there is nothing so harsh as expecting someone to be perfect and nothing as absurd as expecting selflessness from others (have you ever met people?). As Muslims, we understand that people should not be worshiped for many reasons not the least of which is that people are sometimes cranky.

Not only does Islam bring us together and give us perspective within our marriage, it also gives us a road map on how to treat each other: argue with manners, smile, treat each other with kindness, don’t be suspicious, respect each other, a good greeting increases love, don’t backbite, the strong person controls him or herself in anger, at least try to smell good for your spouse, what is his is hers and what is hers is hers, and so on.

So to commemorate our 12 year accomplishment, I have compiled a list of things we have said to each other that have enriched our marriage.

One for each year of marriage. I will not tell you who said what (you can try to guess), but I will tell you that with each comment a serious lesson was learned.

12. I am glad you understand that I am funnier than you.

11. I think your feelings are completely unfounded, but the fact that they are real to you makes them matter to me.

9. I opp-o-lop-ogize. I did it on a porpoise. (stolen from someone else’s marriage)

8. Love should totally be conditional. If you killed me, I wouldn’t love you any more (we both agreed on this point).

7. Let’s have a dance party (translation: let’s sit on the couch and eat ice cream).

5. If you want to talk about money, just email me. It takes the sting out of the conversation.

4. “You’re ruining my life!” In the key of a 13 year-old girl (this is ridiculous and dramatic enough to diffuse any argument).

3. We have to move. We need two bathrooms. 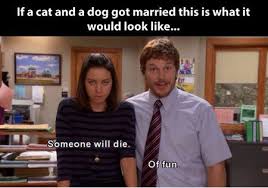 And for my next trick, I will now offer you some sage marriage advice:

1. Don’t take yourself so seriously.

2. You are probably a bigger idiot than you realize (This is general advice. I learned this the hard way).

4. Sometimes you don’t like something about your spouse, but it is the very thing that you sometimes love. There is a hadith about this and it is so true.