As we read in Part 1 (here), penned by our feminist friend, proud Pakistani, and human rights worker, Saadia Haq, we have a serious crisis in the Muslim world. Just one?! No, not by a long shot. But this particular crisis girls are facing is quite serious. Marriage. No child should even have to think about, much less fear the “M” word.

We are seeing a number of underaged Muslim girls being forced by their parents into marriages, all while being told that the injustices done to them are perfectly acceptable in Islam.

There is nothing new about claiming power illegitimately in the name of the Divine. It is the basis of my series, Take Back Islam. It happens in all faiths and at all levels, from familial to governmental.

Slapping the label of religion on something doesn’t necessarily make is so. This is the case with child and forced marriages. 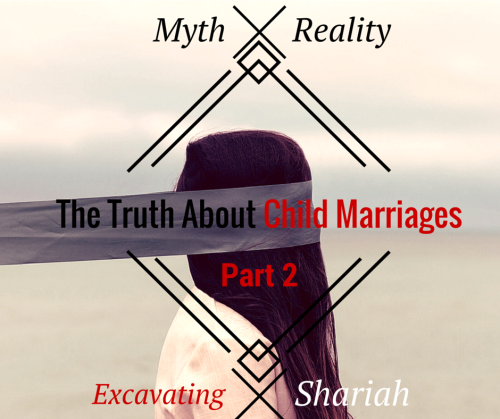 Some use the following Qur’anic verse as a justification for underaged marriages:

“And if you are in doubt about those of your women who have despaired of menstruation, (you should know that) their waiting period is three months, and the same applies to those who have not menstruated as yet. As for pregnant women, their period ends when they have delivered their burden.” (Qur’an 65:4)

A better translation of this verse would be:

“Such of your women as have passed the age of monthly courses, for them the prescribed period, if you have any doubts, is three months, and for those who have no courses (it is the same): for those who carry (life within their wombs), their period is until they deliver their burdens: and for those who fear God, He will make their path easy.” (Qur’an 65:4)

END_OF_DOCUMENT_TOKEN_TO_BE_REPLACED

Part I, Written by Saadia Haq of The Human Lens in collaboration with Theresa Corbin

The topic of prevailing child marriages among Muslim communities makes the bravest of the brave writers think twice, as this thorny subject is sure to bring negative backlash to the persons ‘considered  traitors for airing the dirty linen’ in public.

But let’s not be fools as to bury our heads under the sand as certain groups use all sorts of excuses for global pedophilia. The prevalence of child marriages is evident in Africa Sub Saharan, Middle East and Asia. And when girls aged 7, 9 or 14 are married off, that’s just plain sick. Still in much of the Muslim world and or where Muslims live, the practice of child marriages continues because its part of the native ‘tradition and culture’.

… Continue reading about  victims of this inhuman and unIslamic practice in part 1 here on Saadia’s website.