Recently, I came across an article written by Reza Aslan on Foreign Policy, entitled, “There Is No Divide Between Islam and American Culture”. In fact an American woman, who recently converted to Islam shared it with me. 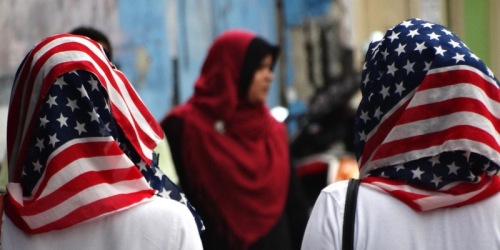 It seemed to be a lifeline to her as a new Muslim. Even a beacon of hope for her in a tough situation-being attacked by most people in her life for her choice of religion. To me, it was another way of saying the same thing I have been writing about for years.

In many ways, I emphatically agreed with Aslan’s piece. I usually do as he has a great way of correcting people’s misconceptions about Islam that is urbane with a touch of “duh, you guys! this is so obvious”.

When Aslan called people who think culture and faith are incompatible, naive; I laughed literally out loud. It was fitting. When he put people on notice that they are being emotional when they think Islam clashes with being American, I thought of all the people who have harangued me through the years with this uneducated and unsophisticated understanding.

I thought of the engineer who assumed I was not allowed to go to a baseball game. The doctor who told me I was giving up my identity when I told her I converted to Islam. The countless people who are brave enough to ask where I am from and then refuse to believe my answer.

I thought of all these people who have come in and usually quickly out of my life. No matter how educated or how well-traveled, they all have an emotional reaction to my existence as an American Muslim. And when plied for their reasons, they can only produce hearsay, anecdotal evidence, and regurgitated propaganda.

This reaction to culture and religion is naive and this reaction to Islam is emotional because those who believe Islam is un-American have never measured this conception against facts.

‘Urf and Deen: Culture and Religion

The fact is that being as American as apple pie and as Muslim as five-times-daily-prayer is not only NOT incompatible, it is natural and a continuation of Islamic tradition.

As Dr. Umar Faruq Abd-Allah writes, “For centuries, Islamic civilization harmonized indigenous forms of cultural expression with the universal norms of its sacred law. It struck a balance between temporal beauty and ageless truth and fanned a brilliant peacock’s tail of unity in diversity from the heart of China to the shores of the Atlantic.