Written by Saadia Haq of the Human Lens

In today’s world, most common people are getting more and more obsessed about one thing, i.e the United States of America. Pakistan’s no different with our long term difficult marriage or you could call it a “thorny alliance” with the super power that has a big say in the affairs of my State. 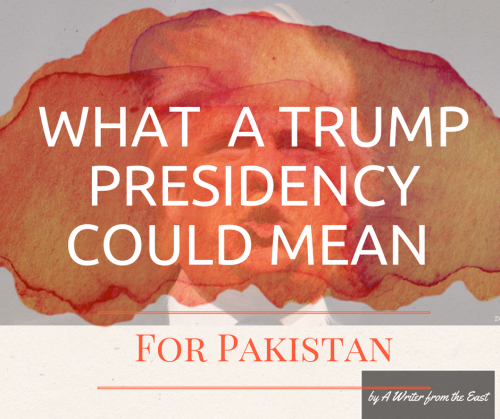 At this point in time, most people I speak with are fixated with the turning tides in the American elections, much cause for dissent and concern.

Obviously, we note Republican’s presidential runner up Donald Trump’s sensational campaign to be a crude circus that flirts with xenophobia, Islamophobia and the need to make Americans once again protected.

According to Trump, America is under grave threats from many enemies. Hang on, every time, we heard such notions from the White House (the inappropriateness of this name, really) USA conducted illegal and disastrous invasions of several sovereign Muslim countries.

So we Pakistanis are more wary of this Trump fellow describing how his post win scenario where he shall seek India’s help in addressing the “problem” of what he describes as a “semi-unstable” nuclear armed Pakistan.

Find part two here, where Theresa talks Trump an what could his presidency could mean for America. Spoiler Alert: It ain’t pretty.

5 thoughts on “What Trump Could Mean for Pakistan”