I have never been the one to talk about my faith much. I have always kind of kept it to myself. So I thought I would come out of my shell and be a part of the convert conversation.

My childhood was like any other child living in the rural America. I kind of lived out of town in the country. Now when I say town, I am talking population of 2500. Yep, not exactly a city slicker. My Mom was the spiritual one. I do have a faint memory of my father being baptized but he was never much of the spiritual type.

I remember doing the candle thing with my Mom and we talked about Jesus but I didn’t really get it. As I grew older, God took a back seat in my life. I was more interested in comic book heroes, role playing games, and spaceships.

After I graduated from high school, I joined the U.S. Army. I have always had a fondness for the military. My Grandfathers and my Dad served, so I wanted to follow in the footsteps. No, really, I was pretty patriotic for a young lad.

This is when the whole God thing entered my life. I was in total disbelief at the time. That soon changed when I met my new roommate in AIT (advanced individual training). Little did I know that he would introduce me to the truth, which has been my truth spanning 30 years now. How time flies. What is this truth? Well, that God truly does exist.

Now, I was kind of pushed into it though. My Christian roommate had a captive audience and did he ever drive the Christian thing home. That is when it happened. God found a way to touch my heart and the Christian thing was on. I was hot and heavy into everything Jesus. A total transformation.

After AIT, I kind of lost touch with my roommate and Christianity for that matter. He was kind of the piece holding my faith together. I had no foundation underneath so my faith slipped away. It didn’t help that I was young and a tad immature. My first duty station was Korea, not exactly a good place for a newbie Christian.

The rest of my military career was OK. I had quite an adventure. However, after 4 years, the Army and I were not getting along so I didn’t reenlist. I plunged myself straight into civil life and went to college on the GI Bill. I befriended one of my college instructors who just happened to be a big time practicing Christian. It boosted me right back to God.

That was short lived though. A certain event happened in the Middle East- Iraq invaded Kuwait. As the air campaign started, I got a letter from the U.S. Army to report for duty. So, I had to drop out of school and head out to what will soon be called Desert Storm. Unfortunately for me, I never set foot on Middle Eastern soil. The reason I say that is, I went to German to support the troops there while they were in deployment to the Middle East. I get asked a lot if I went to Iraq during Desert Storm and I wish I could say that I did.

At any rate, Desert Storm was over almost as fast as it started. I was returned to my civilian life. I had slipped again into my old ways and left God out. It wasn’t until September of 2001 that things changed for me. I have to admit that I had a decent life during those 10 years. I had a good job and I met my wife. My relationship with God was kind of on and off though, more off than anything.

Yes, like many, September 11, 2011 was a game changer for me. I had always been kind of a conspiracy junky and wound up getting caught up in the 9/11 Truth Movement, which plunged me down a rabbit hole I didn’t see coming.

To make matters worse for me, I couldn’t get enough so I took on the Christian Identity Movement. They had me hook, line and sinker. Not to dwell on this very dark time in my life, I only stayed with them for two years. It wasn’t until the birth of my first son that I snapped out of it. I was very ill at the time with debilitating panic attacks and I knew I was in the wrong place, emotionally and spiritually.

This is when I prayed that one prayer to God and said I had enough. I thought for sure I had sent myself on a one-way ticket to hell. Seriously, I really could not handle it anymore. Hell seemed a better option if I was ever going to make it in this world. Yes, I will admit, I was messed up. The only avenue out of two years of brain washing was a total deconstruction of my Christianity. In the process, I embraced Judaism, the very religion that I had previously hated with a passion. Talk about ironic.

This is when I got to see the real beauty of Monotheism. Seriously, it was a beautiful way to embrace God. I started feeling better. Panic attacks stopped. Everything changed for me, even my politics, how I viewed life in general. It was like I transformed myself into a new person.

You know, I bet you are wondering were Islam comes in. Well, here we go. I got this idea one day that I needed to make a Muslim friend. Somebody that I could talk to since I knew nothing about them. That’s when I met a Muslim convert online. She was a blogger so I was able to get to know her and her journey. At one point I was wanting to be Muslim, but got side tracked and now can’t remember why. It just didn’t happen.

That was about 5 years ago, how about I get to the present. I did try to get back to Christianity for a bit, but that just wasn’t going to happen. Judaism was out also, just too many roadblocks to overcome. In 2015, I started to get really interested in Islam again. Islam just seemed to flow naturally on an emotional and spiritual level. I started to make friends online and read everything I could get my hands on. 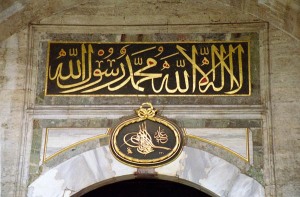 One of the Facebook pages I visit quite often, the owner asked me, since I am already going through the motions anyway, why not say the Shahadah [statement of faith that makes one a Muslim when said with conviction] online. It was that day, in June, that I said the Shahadah and whole-heartedly submitted to my Creator. I had been so alone on my faith journey for many years, but no more. I had a spiritual home. It couldn’t have been more wonderful.

I would be remiss if I didn’t say that I have been struggling through chronic illness and personal issues caused by this prolong illness, sadly, for three years now. I am so thankful to Allah for helping me through these trying times. Helping me stay strong and allowing me to finally find my home with Him.

James is an American Muslim convert and father of two young boy, ages 7 & 5.

One thought on “A Journey Like No Other: Mr. Smith’s Path to Islam”