When I first picked up my copy of Religious Rhyme Time! to peruse its contents, I was initially confused by the cover art. Before obtaining the books, I was under the impression these were strictly Islamic children’s books, written by and for Muslims. Imagine my surprise when the first thing I notice on the cover of the book is the Star of David. Well, the Star intermingled with ot 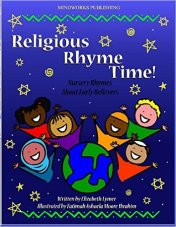 her stars and whimsical swirls.

After turning a few pages into the book, I reach the dedication page that explains the nursery rhymes are written to celebrate the faith of all three early Abrahamic faiths: Judaism, Christianity and Islam. Then I understood the Star.

Religious Rhyme Time! contains children’s religious rhymes set to the tune of popular kids’ songs like “Incy Wincy Spider”, “Old MacDonald Had a Farm” and “The Grand Old Duke of York”. Tying the poems together is a narrative including cartoon children as they go about their day, singing songs about the prophets and God. The cartoon kids also demonstrate the in-verse instructions for “acting out” the poems.

While a couple of the rhymes are a bit long and may be more challenging for younger children, overall Religious Rhyme Time! is a well-written children’s book that offers another option for encouraging children to learn about God, his messengers and his beautiful religion.

I highly recommend it for parents, teachers and Islamic teachers as a staple for their lessons.

Religious Rhyme Time! is published by Mindworks Publishing and is available on Amazon.com.

The second of Elizabeth Lymer’s books that I read was Muslim Lullabies. According to the book’s dedication page:

Muslim Lullabies contain lyrics which gently impart theme about night and sleep from the Qur’an, and teach routine bedtime practices from the Sunnah, making the collection an excellent resource for Muslim children’s bedtimes from birth up to about eight years old alhamdulillah.

Like Religious Rhyme Time, Muslim Lullabies take well-known children’s rhymes and lullabies and turns them into tunes for Muslim parents to sing to or with their little ones. Complementing the themes of gentleness and slumbe 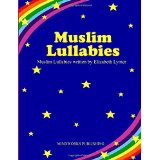 r is the simple artwork — full-page images of the sky, progressing from just before maghrib (dusk) to past isha’a (complete dark). Each tune reminds us that Allah is the one who allows us rest, and it is He who guards us during the night.

My 7-year-old daughter enjoyed this book the most, particularly the closing lullaby “Allah’s Nigh, Night Time’s Nigh” (sung to the tune of “Lullaby and Goodnight”). After first singing it to her, she spent quite a while singing it to herself, to her father, recording herself singing it on our phones, and asking me to sing it with her at bedtime. If you knew my daughter, you would understand her enthusiasm for repetition is limited to entertainment that she truly connects to — and, alhumdulillah, she definitely connected with this book.

In addition, Muslim Lullabies is accompanied by a compact disc (CD) with recorded versions of the lullabies. Traditionally, such a CD would either have children singing the songs, or it might have a variety of adults singing each tune quietly. This disc has neither. Instead, each song is sung by two women, back-to-back. Some of the songs are repeated twice, back-to-back, by each singer. This leads to rather lengthy tracks — or rather, it would . . . if there were tracks.

This particular CD has one track. All of the songs are recorded, a minimum of two times, back-to-back, on the same track. For those of you unfamiliar with technological equipment, this means the listener must fast forward through the single track to find the location of the song they want to hear, should they not want to listen to the CD in its entirety. Essentially, the recording has been made in the same manner as a cassette, only it’s on a CD. This is very user-unfriendly. (This issue has since been fixed and is not super user friendly)

Even more unfortunately, the CD that accompanies the lullabies is also not of very good quality. The voice quality is akin to a home-made recording with no background padding. This leaves the singers sounding like they’re sitting at a table with a slight echo behind them.

I suggest the writer connect with a reputable recording studio to solve these issues and then re-release the CD. The recordings could be a great asset to the published version, especially if the reader isn’t familiar with certain tunes.

I definitely encourage you to pick up a copy of Muslim Lullabies to share with your little ones right away and start making it a part of your family bedtime routine!

Muslims Lullabies is published by Mindworks Publishing and can be purchased on Amazon.com.

The third book in my review of Elizabeth Lymer’s writings is Baby Traveller Bismillah. Aimed at the youngest of audiences, the book introduces dhikr (phrases of remembrance

or supplications) that Muslims say before travelling. Baby joins his parents as they voyage around the world. The author also includes references to items that point out Baby’s five senses.

A simply-illustrated, easy-to-read book, I recommend it for all new parents to share the sunnah of Islamic travel. I already have friends in mind to gift a copy to, in shaa Allah.

Baby Traveller Bismillah is published by Aneesa Books and is available for purchase on Amazon.com.

If you have a book you would like us to review, send us an email at islamwich@yahoo.com.

4 thoughts on “Lullabies and Rhymes by Elizabeth Lymer: A Review”