Many people have an emotional response to the thought of polygamy.

It only makes sense. When you ask someone to think logically about their emotional relationships, it can be difficult.  The ugly emotional center of the brain rears up and goes into attack mode, bullying the more logical frontal lobe into submission. 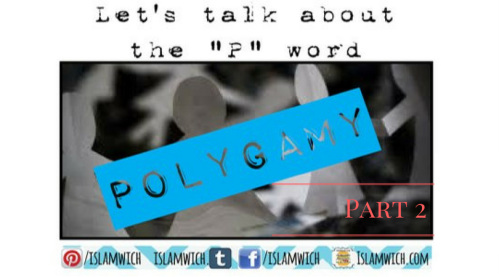 It is hard to separate the emotional and the logical. Add that fact to the fact that we live in a culture that is emotionally attached to believing Disney fairy tales are true … and happen in real life … makes it very difficult to have a logical conversation about polygamy.

But we can logically conclude that if a bird has never flown in your window and helped out with your laundry, it is less likely that a good looking, well-mannered, charming, respectful man or woman from a royal line and tons of money and super good looks will swoop in and solve and/or save you from every problem you have.

And you will most likely not live happily ever after just because you have faith in love. To my mind, this leads to alcoholism. Sorry to break the news. We are all just people and we all screw up and break each other’s hearts.

In the previous post our good friend Gracie touched on the topic of polygyny (Polygamous marriages where a man marries more than one women) and gave examples of when it is advantageous for women.

For some people polygamy works (but if you are in a country where it is illegal and you want to get polygamous, you have two options 1-don’t do it, or 2-leave). That is not to say it is for everyone. It REALLY isn’t.

A tip for the sisters: No one should make anyone be a part of a polygamous relationship against their will.

Some non-Muslims base their opinion of Islam solely on the practice of polygyny. But can we please, just for today, remember a little further back than the American media recommends?

Islam was not the initiator or promoter of polygamy. Polygamy was being practiced long before the existence of Islam. Jews, Christians, and many other [religions and] cultures practiced polygamy, and some still continue to do so. Famous prophets practiced polygamy, such as David, Solomon, and Abraham. In fact, Islam was the only religion that restricted and regulated polygamous marriages.

And, we at islamwich do not advocate polygamy outside of the strict Islamic guidelines.

THAT never works, because it can so very quickly become oppressive. The way some communities practice polygamy is rather reprehensible. I have heard of men marrying pairs of sisters and even mothers and daughters (you are just asking for drama in those situations) and all women are sleeping on the floor of one room. That is called greed and neglect, not polygamy.

Even within some Muslim families polygamy is not practice in compliance with the Islamic guidelines. I have seen it a hundred times, some lazy piece of $#!+ brother marries a nice religious sister, who may not have a lot of Islamic knowledge, but she tries. And this brother convinces her that it is his right to marry another woman.

The problem is he isn’t taking care of the first wife. She works, does all the chores, and is raising their children. I am sure he is bored with no way to expend his energy besides sitting around playing video games and talking about how women don’t wear hijab properly. And I am sure she is exhausted from all her responsibilities. His “logical” answer is to get another one. WRONG!!!!!

Another tip for sisters: You get to write a contract when you get married. If you aren’t down with getting polygamous, put it in your contract. And YES, it is allowed. Just ask Ibn al-Qayyim who wrote in Zâd al-Ma`âd (5/117-118):

If a man agrees to the condition that he will not marry a second wife, he is obliged by that condition. If the man breaks his promise, the woman will be entitled to terminate the marriage contract.

And there is a precedent for it in the Sunnah.

The rules of the road.

[..] marry women of your choice, two or three, or four; but if you fear that you shall not be able to deal justly (with them) then only one. (Quran 4:3)

1-      Polygamy is not an obligated rule; it is a permissible act.

In truth, not many men can stand up to the test of polygamy, but they still want to fail trying because they believe it to be their “right”. But:

Polygamy is not a right, but a responsibility to ensure social justice […] What Allah has granted is in fact a restriction on an existing practice of that time when men could marry as many wives as they wanted.- pbs.org

It is the man’s responsibility to provide for his family. He must, to the best of his ability, provide his wife and their offspring with an appropriate standard of living. If the wife decides she would also like to earn money, it is hers to keep, entirely (this is not to say that couples cannot make different arrangements for financial means. They can but only if both partners agree).

You will never able to be fair and just between women even if that were your ardent desire. (Quran 4:129).

In this verse, just treatment means so much more than a man’s financial capacity to support more than one wife. We have seen it before, men with money are very capable of showering their loved one’s with things, but seem incapable of doing the same showering with time or affection.

A husband must give equally to each wife his time, support, and companionship.

It is hard enough to be man enough for one woman and family; imagine having to work two to four times as hard.- My husband said in an interview after he did the dishes: an effort to live up to the Prophet’s (PBUH) example of being man enough to do housework.