The need for answers is huge, as I discovered from last week’s Q&A post and from life in general.

So here are 5 more of your burning questions about Islam- and more- answered to the best of my ability. 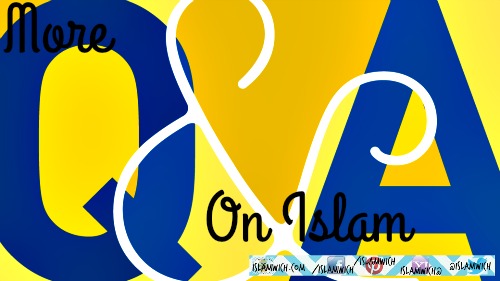 Q1: Why are there so many different opinions on whether it is OK or not allowed for a husband to beat his wife?

A1: When thinking about subject matter of such importance, you have to wonder whether people are allowing their inner most desires to influence there verdicts rather that the truth. To be sure, the opinions of modern day imams are not being influenced by their desire, we need to go back to what the early scholars of Islam took as the Prophet’s Muhammad’s (Peace be upon him) meaning.

Taking into account that the Prophet (PBUH) never hit any woman, expressly forbade people to do so, and that the verse stating it is allowed can be translated very differently; any sane person can come to the conclusion that beating one’s wife is forbidden.

This is a serious subject matter that I will dedicate an entire post, or series of posts to, but in order to sum up, there is a large body of evidence that beating is never allowed, and to think that it is creates serious harm to families, communities, and societies. Refer to this video for more info:

Q2: I think most Muslims simply take the parts of Islam they like and follow their own individual versions of Islam. But don’t people do that within Christianity–and even Catholicism–too? What’s the difference?

A2: There is no difference. And here is the reason: because we are all human beings with weaknesses and desires. We, as flawed beings, have a hard time letting go of what we want for what is actually good for us. It’s our nature and no matter the faith, we are all still humans. Once you start thinking of Muslims as fellow human beings and Islam is not always perfectly represented by us, you kinda get the picture.

However, some people are really trying there best to find the truth of God and follow it to the best of their ability in accordance with revelation and not their desires. That is the point. Not to change the faith itself, but to let your faith transform you to be a better person. I think that is true for all religions. But you may ask, why Islam. Read my invitation to Islam here if you wish to know.

Q3:  Where are the Egyptian and Jordanian armies in the fight against ISIS? Watching TV?

A3: They are fighting ISIS. Check it out. And they are probably also watching TV.

Q4: Do Muslim women think badly of other women in other faiths that do not cover up?

A4: I cannot speak for every Muslim woman, but I know that if I am thinking badly of anyone because of the way that they dress, I know that I am on the wrong track.
There are even plenty of Muslim women who do not cover, but may be closer to God than I am. Who am I to judge them based on appearance? If you have a time to judge someone else that means you are perfect and that just is never going to happen. So, if a woman is thinking badly of anyone else for any reason, it means she thinks she has the right to do God’s job (judging) and she is perfect. Basically she is committing a huge sin of arrogance. And to answer your question, yes, some Muslim women do this.

Q5: Why aren’t women in some Muslim countries allowed to drive?

A5: Honestly, I have no idea. And I have been looking for the answer to this question for many years. Back in the day of the Prophet Muhammad (Peace be upon him) women rode camels and horses (the modern day equivalent to driving a car) and he never said “boo” about it.

The thing to remember is that not every law in majority Muslim countries are representative of Islam. Sometimes they only reflect cultural practices that are ingrained in the society.
Some of these laws are horribly oppressive to woman and go against every Islamic principle, and yet they exist. But there are many Muslim woman out there trying to change that. Check out my series on these issues called “Take Back Islam” on the Table of Contents where I go into more detail about how these injustices done to women are un-Islamic but still done under the guise of Islam.

Once again, please feel free to ask any genuine questions you have about Islam or Muslims. I will do my best to give you a genuine answer to the best of my capacity.