The Double-Standard Dilemma: Part I

Jennifer* was a convert Muslimah. Though she had only recently reverted to Islam, she was always a modest young woman, trusted wholly by family and friends.

About a year after her reversion, she met Ali*. He was a few years older than Jennifer, but since she had always been an “old soul” she was okay with the age gap. After meeting with him a few times, under halal (permitted) conditions, they agreed to marry. She had asked him every question that came to mind about their respective roles as husband and wife, but because of her conservative pre-marriage lifestyle, Jennifer assumed the basic routine of day-to-day living would remain generally the same for her.

One evening Jennifer made plans with a friend for dinner. Prior to going out, she let Ali know her plans, as he was also going out with friends for the evening. As she wrapped her hijab, Ali popped his head into the bedroom.

Jennifer looked at his reflection in the mirror and smiled. “I’m excited to see my friend. I haven’t seen her since college. We used to sit together for hours, just laughing and talking.”

“I’m leaving now. What time are you meeting her?” Ali leaned against the frame, crossing his arms over his chest.

“About seven. Great! So we’ll probably get back home around the same time, I’m guessing.” She stuck a final pin into the side of her scarf, grabbed her bag off the dresser and turned to leave.

“No. I’ll probably be late. Maybe around eleven or later.”

Jennifer walked over to him and patted him on the cheek. “Me, too. I told you. . .we can sit for hours.”

Ali shook his head and laughed. “Are you serious? No way.”

She stepped back, confused. “No way what?”

“No way about you staying out until eleven. That’s no good. Women shouldn’t be out that late.”

Jennifer laughed to herself. “What do you mean? I’m not going out to a club. I’m eating dinner, sitting with my friend in a restaurant. Besides. . .you said you’d be home around eleven or later. What’s the difference?”

“The difference is I’m a man.”

ONE NIGHT ONLY: Woman vs. Man!

And so it starts. The beginning of a recurring theme running through many, many marriages.

Of course, we can’t just limit this to Muslims, or even Arabic culture (a major contributing factor to this issue to begin with). However, for the purpose of this blog, I am only looking at the concept of double standard within Islamic-based marriages. To focus discussion even further, I will limit my scope of criticism to three areas of double standardization: 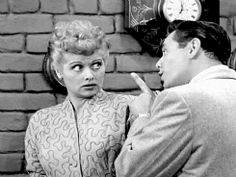 Somebody got some ‘splainin’ to do!

For those of you familiar with the I Love Lucy Show, the image above most likely conjures memories of hilarious scenes between the title character, Lucy, and her Cuban-imported husband Ricky, wherein Ricky spends a great amount of time chiding his naïve and childishly-scheming wife in a mixture of Spanish and heavily-accented English while wagging his finger in a patronizing manner.

This is met, in return, by a loud, whining, “Waaaaaaaaahhhhhhh,” by Lucy, who offers the iconic phrase with closed eyes and a wide-open mouth. Add in the later Technicolor effects of Lucy’s bright red hair and unmistakable lipstick and you’ve got one funny picture.

Of course, if you take a step back and look at the bare-bones story, you see an overly-patriarchal husband chastising his younger wife for something that may-or-may-not be completely her fault. (Well, to be honest, in Lucy’s case, it usually was her fault.)

But the point is, in watching the exchange between the animated couple you hardly ever see Lucy stand up to Ricky. She takes everything he dishes out with a (mostly) closed mouth. And even when she tries to get the upper hand, she does so in a silent, action-oriented manner. . .that often backfires (poor Lucy!).

For those of you who aren’t familiar with the show, you may be wondering why I’ve brought it up.

Because this model is played out in many modern Muslim marriages, in the spirit of “heading the household”, the stronger, usually male, personality takes over and expects all to follow his way.

Western female converts know this posturing all to well. Her more-likely-than-not foreign born husband or even her community believes that the her conversion has been a way for her to escape a “hellbound” culture of capitalism, consumption and hedonism. Clearly, when we become Muslim, there is no desire to maintain any ties to our own cultural identity. . .or we wouldn’t have converted, right? *Sarcasm*

For most, the first sign of the “elite male status” rears its ugly head during the first argument. Let’s assume, for the sake of argument, both husband and wife are converts (this gets rid of the sticky “in my culture” issues that always come up in an intercultural relationship).

Since we understand couples argue for a variety of reasons ranging from stupid to life-altering, let’s say the water bill didn’t get paid, and now the water has been disconnected. This wasn’t due to lack of funds. It was simply due to oversight by one or the other.

What follows is a typical experience for many female converts in terms of arguing with a spouse:

Husband: There’s no water. What’s wrong with the water?

Wife: I don’t know. Maybe the whole building has a problem?

Husband: I’ll ask the neighbor. (Leaves to ask neighbor. Returns.) They have water. It’s just us.

Husband: Did you pay the bill?

Wife: Was I supposed to pay the bill? Don’t you usually take care of that?

Husband: Did you remind me? Let me go see if the pipe is fused. (Leaves. Returns.) They fused the pipe.

Wife: I guess the bill didn’t get paid.

Husband: Why didn’t you remind me? I have a lot of things to do.

Wife: I also have a lot of things to do. I suppose I didn’t think about it.

Husband: That’s the problem. You don’t think about things that are important.

Wife: Of course I do. I’m just not used to thinking about things that I don’t usually take care of. Since you always pay the bill, I didn’t think about it.

Husband: A good wife reminds her husband about important things.

Wife: So, now it’s my fault because you didn’t remember?

Husband (raising voice): It’s your fault because you didn’t remind me!

Wife (raising voice in response): I’m not your secretary! Can’t you make a note of important things?

Husband (yelling): Don’t raise your voice to me! I’m your husband, and you must show me respect!

Husband (increasing in volume): I am your husband, and I have the right to yell! But you will not speak to me this way! Do you understand?

Now, depending on the general temperament of the man and woman, this episode will escalate further with both getting out of control, or one person will eventually back down. But the question is: why does the husband believe it to be okay for him to raise his voice at his wife, but not for his wife to raise her voice in response?

Why are women – especially Muslim women – expected to be demure and soft-spoken, even when being yelled and cursed at by the person whom they are supposed to respect and trust most in the world?

Why are men allowed to give in to their human characteristics of anger and displeasure, while women are labelled “emotional” and told to contain their feelings?

It is only natural to want to respond in kind to someone when they verbally attack you, be it through volume or vocabulary choices. However, this is considered taboo, inappropriate or disrespectful of men when women get upset and show their feelings.

What ends up happening is that over time, the woman will start to exhibit traits of an emotional or psychological abuse victim. She will withdraw at the sign of argument, afraid to stand her ground, even when she is right to do so. Her opinions will become invalid, even to herself.

She will contain all feelings, positive and negative, until pent-up aggression and expression will cause her to be overcome with anxiety. And then she will not know where the anxiety stems from, as she’ll end up letting her emotions fly at the most mundane of incidents (see: opening a blister package for medication).

This exchange shows that no matter how he viewed his own opinion in the matter, even Prophet Muhammad (saw) acknowledged his wife’s right over him to be fairly heard and express her feelings.

He didn’t yell and say, “I don’t care what others think. It’s my opinion that counts.”

Nor did he demand they go to the first person he suggested as a mediator. In fact, he didn’t stop offering names until he found one she agreed with. So, even in their disagreement, he wanted to make sure he found someone who would support her and be fair in their decision about the disagreement.

Additionally, Pakistani freelancer Sadaf Farooqi explains in his article discussing an incident where A’ishah (ra) was verbally attacked by her co-wife, Zainab (ra), in her own home :

He [Muhammad (saw)] did not – and this is a very important key point – exhort the wronged person to keep silent in the name of patience and restraint. He did not allow their oppressor to continue with their injustices. Rather, he made sure that the wrongdoing was not just stopped, but that the one who was wronged also defended themselves.

Even though Zainab (ra) was older than A’ishah (ra), the Prophet (saw) gave his approval for her to speak up about what was being said against her.

Truthfully, the answer is not in who is allowed to yell and who is not.

The answer lies in open communication. Understanding the right that both parties in a marriage have for expressing their opinions, being heard and trusting their partner with protecting (through mutually respecting) their feelings.

One person or the other dominating a relationship and holding the other emotionally hostage is the very definition of dysfunction. As we can see from the example, even our Prophet (saw) permitted his wives to have their say and defend themselves in an argument.

Instead of fighting – yelling, screaming, cursing or worse – couples must learn what works best for each of them when they’re upset or angry. This can take time, but the best answer is being open and honest.

If you need to blow off steam, that’s fine. But make it clear to your spouse this is needed. And then get away from them. It’s okay to unwind and calm down. It’s not okay to do it at the expense of another person’s well-being. And it is even more NOT OKAY to say that just because you are male Islam gives you the right to be an emotional bully. . .or worse.

*The couple mentioned in the story at the beginning are fictitious. Any similarity or resemblance to real people is unintentional.

6 thoughts on “Take Back Islam: No More Double Standards Part 1”