What exactly is the Islamic world? Is it like Disney world? A place where Muslims go to pay too much for halal snacks and wait in line for hours to get a fatwa? Is it the place that I have been told to go back to by bigots shouting on the street? Ooorr is it the place where some media “personalities” pretend all Muslims come from- The Middle East? 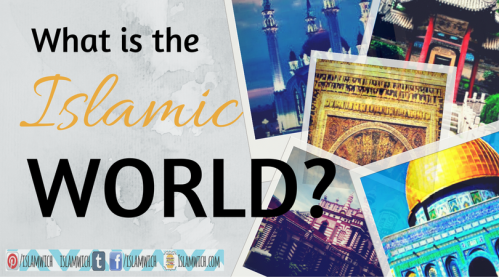 Well, I hate to break the news to you, but there is no Islamic world. There is no place with over priced halal snacks (OK maybe there are those) and lines for the fatwa ride. Just because someone is a Muslim doesn’t mean they had to come from somewhere else. And only 18ish% of Muslims in the world live in the Middle East. 18%. only. Muslims live and practice Islam in every country on the planet in a variety of concentrations.

Muslims are diverse. Let that sink in. Diverse. We participate in every culture from every country. We are indigenous peoples in the West, in the East, and everywhere in between. We fit in no box.

We worship our creator, share in a sisterhood, wear jeans and eat red beans and rice down South. We pray 5 times a day, say “Salam”, wear embroidered caps, and eat dumplings in Xinjiang, China. The “Islamic World” is the actual world.

But from time to time, I am confronted with the kind of thinking that Islam is for one kind of people who belong to one section of world. Basically people think that Islam is a monolith. And people who think this often say things like:

Some of this misunderstanding is innocent. Some fall prey to media “personalities” ignant (i.e. super ignorant) rhetoric.  However, most of this ignance is willful-an attempt to cling to a certain erroneous world view.

This person has lived somewhere in the Middle East among Muslims so now they are “experts” on Islam. How cute. If you went to Bourbon street (or any street in the French Quarter) in New Orleans, a very Catholic city in a very Catholic state, do you think you will see Catholicism represented even though the majority of (Catholic) people are hooking up, fighting, getting wasted, going from one strip club to the next?

I’ve lived among these people for a long time and still know the difference between what people do and what their faith teaches them to do. Living around Muslims doesn’t mean you know anything about Islam.

Then there is the inverse of this:

Firstly, see the above. Living near a group of people who call themselves the same thing you call yourself doesn’t automatically make you more knowledgeable about that identifier. We don’t learn by osmosis.

Secondly, would you tell a Christian living in a place where Christians aren’t the majority that they can’t understand their own faith because they aren’t surrounded by Christians? No, you wouldn’t because it’s insulting, arrogant, and ignorant all at the same time. The trifecta!

Finally, how I can understand Islam is by studying it since 1998 and living it since 2001. That’s how I can know my faith. It’s not a magic trick, learning Islam outside of a Muslim majority country. It’s called reading, talking to scholars, researching, learning Arabic, etc.

In fact, if you live in a Muslim majority country and do not study, and read, and research Islam, you do not know Islam, even if you are a Muslim.

Please read my Take Back Islam series where I share my research about what the Prophet (PBUH) and his immediate successors actually said and did, and kick corrupt laws parading as Islamic in the teeth.

But if you don’t have the time to read all that, let me just say, that many of the “men” in charge in Muslim majority countries are and have been misusing religious texts to control and intimidate their citizens. This has happened and continues to happen in all faiths.

Mankind has a serious problem when it comes to twisting religions (or any philosophy) for their own greedy ends. But thankfully Islam still exists free from that corruption and we can still go back to the texts and find the truth.

The “I watch the news and/or listened to Islamophobe X, Y, and Z, so I know Islam” fallacy

No, no one would do that because they would not learn anything about what these faiths teach. They would only learn headlines and which kind of hate is selling these days.

You cannot know Islam if you have never lived Islam. Islam is an experience. The “Islamic world” is THE world.

3 thoughts on “What Is The Islamic World?”