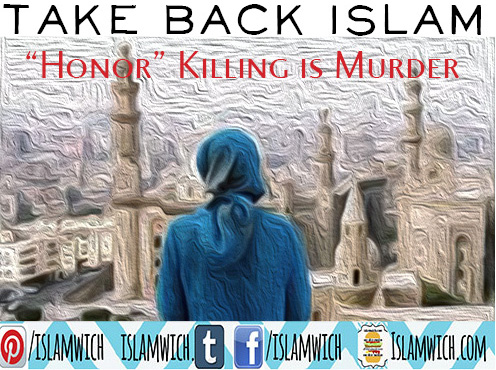 Treat women well and be kind to them

-Muhammad’s last advice to his nation

So it was not much of a surprise to me in my pre-Islam days when many of my male “Muslim” acquaintances would engage in much of the same behavior. I learned about how sons are patted on the back for promiscuity when one  such “Muslim” acquaintance was paid a visit from his family. Upon being discovered sneaking into his home at a late hour, he was greeted with an attaboy from his father when it became clear that he (the son) had been out “hooking-up”.

Months after this interaction with his father, my “Muslim” friend was praising his sister back home. He spoke about how she had married young and was such a good girl and so on. Thinking back to his attaboy for being a womanizer, I asked if his family would be ok with her even if she had behaved in the same manner as he did.

The hypocrite in question flew into a rage, without any amount of exaggeration said he would kill her himself if she ever acted like that, and warned me never to talk about her like that again.

This was my first heart breaking introduction into the injustice of honor crimes.

At the time not knowing much about any culture or religion other than my own (American, former Catholic, agnostic at the time), I had to begin the difficult process of unpacking the cultural practice of honor killing from Islam.

Allow me, if you will, to explain in the most honest terms what an honor killing is. It is a heinous practice that predates Islam and is inherited from Hinduism, Roman Law, and other archaic systems that postulate that a woman’s worth lies in her sexuality and its usefulness to male family members. In honor killings male family members claim ownership over female bodies and take it upon themselves to murder them over matters of chastity and “inappropriate” relationships all to spare the family the “shame” of gossip.

The practice of honor killing is a long and dishonorable tradition around the world.

Perhaps the most memorable case of an honor killing was when Henry the VIII beheaded his wife, Anne Boleyn, for suspicion and rumors of adultery. He also murdered another of his wives, Catherine Howard, for the same suspicion. But this is lesser know.

1.) Because the media and leading Islamophobes have inaccurately painted a picture about how these crimes are always committed by Muslims, ignoring the fact that victims come from many different cultures and religions.

2.) Because, yet again, some Muslims prove Islamophobes and the media’s narrative correct. They mistake their archaic, brutal and backward cultural practices as Islam, when they in fact have nothing to do with Islam.

I feel like I have said this a million times, but the fact is that cultural, tribal, and local traditions often conflict with Islamic teachings. And people, in their ignorance, arrogance or whatever, cling to their traditions and wrongly call it Islam. Just because a Muslim does it, does not make it Islamic!

The capital punishment of adultery (sex with someone you are not married to while you are married or divorced) is not due to any “honor.” In fact, it is applicable to both men and women and only intended to establish social justice; to prevent disease, broke baby mommas, starving and fatherless children, and all the emotional turmoil that comes along with adultery.

A case of adultery must be proven with strict eye-witness evidence in a court of law and left up to the judge to forgive or punish. It is SO hard to prove adultery that the capital punishment has only ever legitimately been implemented in cases where the adulterer repeatedly confessed (without coercion). Therefore it is considered a deterrent rather than a harsh penalty.

It is also important to understand that in the Muslim World today, shar’ia (Islamic law) is practiced crudely, and far away from the objectives and intentions of shari’a as it was practiced by Prophet Muhammad (PBUH) and many generations after him. “Muslim” countries today see it only as a series punishments to keep those without money or power “in line”. They do not see it for what it is: a comprehensive system that first teaches its citizens, deters them from corrupt behavior, upholds social justice and forgives and offers excuses before it ever punishes.

Under no circumstances can a family carry out capital punishment. In the event such a killing happens, it is a considered murder and the murderer needs to be punished by the judge. From Muslim Matters

In honor killings the family is on a witch hunt and acts as judge, jury, and executioner that does not admit evidence, only regards appearances in their community, tribe, or sewing circle.

What did the Prophet (PBUH) do when the chastity of his wife, Aisha, was brought into question? He did not accuse her, he did not fear people talking about him, he waited for proof to be established.

Aisha was innocent of the rumor and because of the emotional turmoil she suffered from the slander, the following verse was revealed in the Quran “Verily, those who accuse chaste women […] are cursed in this life and in the Hereafter, and for them will be a great torment” [al-Noor 24:23].

Islamically speaking we are all responsible for our own honor. If honor was a family enterprise, Abraham- God’s Khalil (dear friend)-would have been dishonored by his father’s idol worship- a sin that is far worse than adultery. But we know that this is not true. And even still if “honor” killing was truly about the honor of the family, why do we not see male victims? Does it not take two?

In combination with the fear of gossip, honor crimes are a function of some men’s deluded feeling that they have ownership over female bodies. I hate to break this news to the head of the tribe–Islam freed women from being thought of as property over 1400 years ago. I guess the news is slow to get to them in their caves. Furthermore, men do not even own their own bodies (if we had ownership over our bodies, would we allow them to age or get sick?). We belong to Allah not to each other. Quran 2:156 […]”say, ‘Indeed we belong to Allah , and indeed to Him we will return.'”

And are we supposed to believe that being a murderer is more honorable that being related to someone who may or may not have had an inappropriate relationship with a man?

When women are murdered for seeking a divorce (divorce is completely acceptable in Islam); being raped (the rapist is the one who should be put down); for refusing an arranged marriage (forced marriages are not allowed in Islam); and even sitting next to a man (not a sin in the least!!), how can anyone claim this has anything to do with Islam? How can we sit by and not tell the truth that these women were terrorized and murdered for nothing more than ego?

I recognize that violence, murder and abuse are perpetrated within non-Muslim families in the West. It happens A LOT, unfortunately. My writing about the topic is not to say that the Western world is free from hate crimes committed against women. Not by a long shot. The Western world has its own glaring issues when it comes to the proper treatment of women and prosecuting crimes against them.

But this is not a game of pointing fingers. Get over yourself if that is your first reaction. My writing on this topic is to take the legitimacy of Islam away from those who commit these crimes against my sisters and point out blatant ignorance and backward cultural malarky that MUST be stopped.

Check out Part II where I destroy reasons people claim committing murder in the name of “honor” is Islamic.

30 thoughts on “Take Back Islam: “Honor” Killing is Murder Part I”