One of my best friends is my (not much) younger sister, Eileen. She is sarcastic, feisty, and nearly identical in personality to me except that we took very different paths in life. During our daily sessions of avoiding work and texting each other funny stories she was gracious enough to agree to contribute to islamwich, giving her perspective of my conversion to Islam. What follows is her story. The names have not been changed because no one was ever innocent. 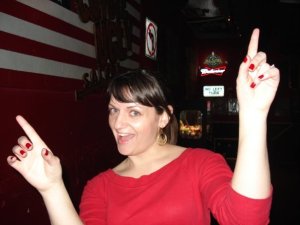 I am the proud sister of a Muslim convert, but it wasn’t always that way.

Let me take a step back and tell you a little bit about me and my family.  I grew up in a crazy household in southeast Louisiana containing 3 sisters, one much older brother, a sometimes half-brother, one mom, and one dad.

My mother was a staunch Roman Catholic and my father was something of an atheist so we were raised Roman Catholic. I mean we were raised Catholic in that we went to Catholic school, attended mass minimally every Sunday, and prayed the rosary before we traveled to protect us from harm to give a few examples.

It was a strict upbringing that instilled a strong sense of guilt in me (feeling it and dishing it out – takes one to know one) and a great amount of respect for traditions and trusted adults. However, I am no longer Catholic and quite resistant to senseless authority as a result, and neither is one of my siblings as she is now Muslim.

I remember my sister converting to Islam in such a slow fashion that it was surprising but not all that surprising either. Let me say that my sister and I are close, very close, so I guess it wasn’t surprising to me because I was present for the conversion itself but at the same time, I just didn’t get it.

My sister was rooming with a friend who converted to Islam and had a ton of friends from the Middle East while she was in college.  We were both exposed to the culture including their religion. I remember hanging out with my sister and seeing all of the artifacts including excerpts from the Quran and thinking that they were beautiful and artistic and different from anything I had seen in all of my 17 years of existence. I listened to their explanations but didn’t really think too much of it.

I remember thinking to myself upon the explanation of Mecca and that resistant side of me coming through, “Ha, no one is going to tell me I have to trek somewhere to pray at least once in my life, puh-lease … unless it’s Paris.”

I thought she was going through a phase. I had been here before with her many a times and I gathered this too shall pass. Turns out I was wrong… well I guess after 13 years it could still be a phase; only time will tell. I will illustrate through the 5 stages of grief how I processed and ultimately came to terms with my sister’s conversion to Islam

My dear sister has the worst timing. She has genius comedic timing but overall her timing sucks. She “decided” to convert to Islam shortly after 9/11 happened. I know this wasn’t her choice but her timing sucked. She enjoys not only being different (always has, always will) but also being difficult. When she first converted, as I mentioned before, I thought it was a phase so I didn’t think much of it hence denial.

Shortly after her announcement that she was becoming a Muslim, I was planning my wedding. I had asked my sister to be one of my bridesmaids in my wedding and the dress (not in adherence of her new religious sanctions) was already purchased and altered. She kindly asked if she could not be in the wedding and I refused to accept that.

Did I mention I’m very stubborn and difficult at times which are most of the times. She is a good sister and did me this solid. To this day I regret forcing her to do something that she didn’t feel comfortable with but this was all so new to us and I just didn’t get it at that point.

Oh did I mention that my sister also decided to participate in an arranged marriage? Well, she was ready to settle down and in accordance with the customs of Islam she decided to start the process of setting herself up to have an arranged marriage. She told me she was to wed a man with a similar background in that he was an American Muslim convert from the same area that we were raised in.

I beg her not to go this way because he could be a serial killer (jury’s still out) and that she could come live with me. Suffice to say, she married him any way and they are still together after 12 years.  Who’d have thunk.

This was a brief and selfish period of the process but didn’t I mention I was stubborn and difficult? This was my sister that was my best friend growing up and now I felt we were going in different directions. I was no longer religious but it was hard to relate to her interests now.

We use to be very much into singing and acting and she didn’t do that stuff anymore. I didn’t feel like we could discuss fashion or food (did I also forget to mention I am the #1 bacon fan of the world and thoroughly enjoy a cocktail and/or a glass of wine) or anything we use to be able to discuss because I was being closed-minded and selfish. Luckily, this was a very brief period when I figured out quickly how silly I had become.

We have discussed so much of my sister’s religion over the last decade or so and I feel like I have a pretty good outsider’s perspective on her faith. I even took a History of Religion course in college to have a better grasp during our discussion because I refuse to look a fool in front of her by asking silly questions that I use to ask i.e. how do you not pass out from heat exhaustion during summers in the south with all those clothes on? Or, do you have a love hate relationship with strong breezes like I do? Or, don’t you miss bacon? ( I really do love bacon – I know pigs are gross) 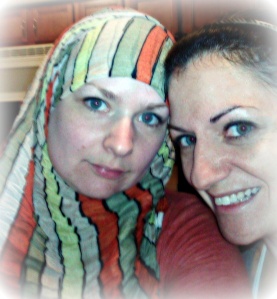 14 thoughts on “My Sister is a Muslim Convert”