Never ever again will I judge a person’s freedom and liberties by the length of their skirt -Yvonne Ridley famous British journalist who converted to Islam.

The media, to its credit have run some article’s from the Muslim women’s perspective, but by and large they are portraying Katherine, and women like her, as having been forced to convert to Islam. 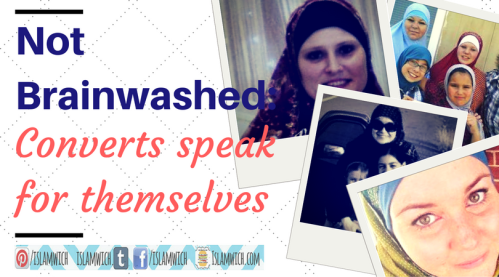 Many news outlets are trying to portray Katherine as some sort of weak woman who fell into the hands of an overpowering force and was brainwashed straight out of Christianity and in the headscarf, Islam, and the arms of a terrorist. Absolutely ignoring the possibility that Katherine may have converted after much soul searching and reflection done of her own free will.

“She was a very sweet woman, but I think kind of brainwashed by him,” reported the Associated Press, quoting Anne Kilzer, a Belmont, Mass., woman who said she knew Katherine and her 3-year-old daughter.

As a wife, I cannot imagine what Katherine is going through. As an American woman who converted to Islam, I am very familiar with the stereotype that is pushed upon women who choose Islam.

It is insulting. It is a roundabout way of saying that women who convert to Islam are weak minded.

This is not the case by a long shot. Women who convert to Islam are typically outspoken, well educated, free thinkers, and are brave enough to deviate from the path society has set for them.

When I converted to Islam, the sister who was giving me shahada (the statement of faith) asked me why I was converting. She asked me twice if I was doing it for any person or felt forced to do it in anyway. “Because”, she said, “if you say that you believe and someone made you say it, your faith would not be accepted from you. Allah (SWT) knows what is in your heart.”

How can someone be brainwashed and sincere? How is it that in Islam your faith will not be accepted from you unless you are sincere? Sincerity cannot be coerced. It is like saying you were forced to fall in love, it just doesn’t work that way.

And where is the follow up to the brainwashing? In order to sustain a state of “brainwashing” you also must isolate the subject from the outside world. You don’t see this with Muslim converts.

They go on to study at universities; work as teachers, scientists, military personnel, journalists and so on; they do charity work; they are politically active and motivated to be productive members of society.

With headlines like the following, journalists are scrambling to find a reason for so many people entering Islam in the West:

Why European women are turning to Islam

We are a group of women who despite how we are portrayed in the media, we hold our heads up high because we know who we really are. We will not be explained away as feeble minded or weak. We can speak for ourselves. And we will:

Fatima, a Canadian who converted to Islam says:

[…] I experienced the absolute power of prayer as I watched on TV for the first time in Tahrir square, Muslims pray.

This was my first call to prayer, I felt a blindness in my life had been cured. Shortly after this a good friend of 3 years I had met on Facebook, who lives in Cairo, Egypt showed me via Skype the Masjid outside his window just as Fajr [pre-dawn] call to prayer sounded.

I bowed my head and in my heart felt this to be the most beautiful sound I’d ever heard. This was my second call to prayer, I felt a deafness I had in my life had been cured. I then purchased a Qur’an [the holy book] opened to Al-Fatiha [the first chapter of the Quran] and first few pages of Al-Baqarah [the second chapter], I knew I was about to find out what I always prayed for, the meaning of life, serenity, and peace of mind. I spent a year and half on a very special journey (that continues by the minute) soul searching leading me to begin studying Islam […] 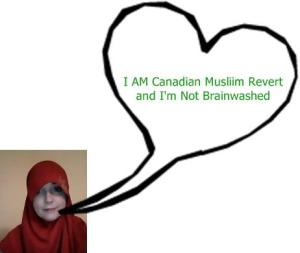 I received an email inviting me to attend Iftar [the meal that breaks a Muslim’s fast] on 2 Ramadan 1433 H […] This was the opportunity I had been waiting. I had not went to a Mosque since I heard my first call, there was a voice that kept telling me to wait, I would know the perfect time. It was this night I declared, As-Shahadah [the testament of faith].

Immediately upon entering the parking lot of the Masjid and a Sister greeting me at the door I felt a light shine and my spirit jump and was fully awakened realizing I was always a Muslim by heart but did not know until Allah Subana Wa Ta’ala [God] decided it was my time to live and to be given a right to life with dignity through the Muslim way of Life shown to us through the perfected life of our beloved Prophet Muhammad (Sallallahu alayhi Wasallam).”

Western women who convert to Islam have chosen a different path that takes commitment, courage of conviction, and strength of character in today’s world. Never assume a women is brainwashed simply because she is choosing her own path.

13 thoughts on “Not Brainwashed: Converts Speak for Themselves”